Veneto, Bordeaux, Rioja; they’re all some of the top wine producing regions across the globe. In spite of its European dominance, wine can be produced in all manner of continents, Asia included. Within Asia, the top wine producing regions are found throughout Japan. Although it’s most commonly linked to Sake rather than Sauvignon Blanc, Japan is actually home to some of the most interesting hidden wine regions.

Traditional beliefs about winemaking have labelled Europe as the wine producing capital of the world, forcing other continents to be overshadowed. In addition to anime, cherry blossoms, bullet trains, sumo wrestlers, and sushi, you can add wine to the list of things we associate with Japan. Read on to discover more about the top Japanese wine regions.

First up is Hokkaido, which is Japan’s northernmost island, making it the coldest one, too. The island’s centre is comprised of mountains and volcanic plateaus, which creates frosty winters and chilly summers. Since it’s not uncommon for temperatures to drop beyond freezing point during the winter months, it can become increasingly difficult to manage vineyards. As a result, vines are typically buried during autumn to protect the flower buds from freezing.

There are some renowned brands in Hokkaido, including Hokkaido Wine Company and Tokachi Wine. Tokachi is a distinctively dry wine that’s made from sour grapes of a crossbred variety, including Kaibutsu, Yamayuki, and Kiyomi.

Wineries can be found throughout the region; however, the vast majority are situated beside Sapporo. Consequently, creating your very own Japanese wine tour couldn’t be easier. 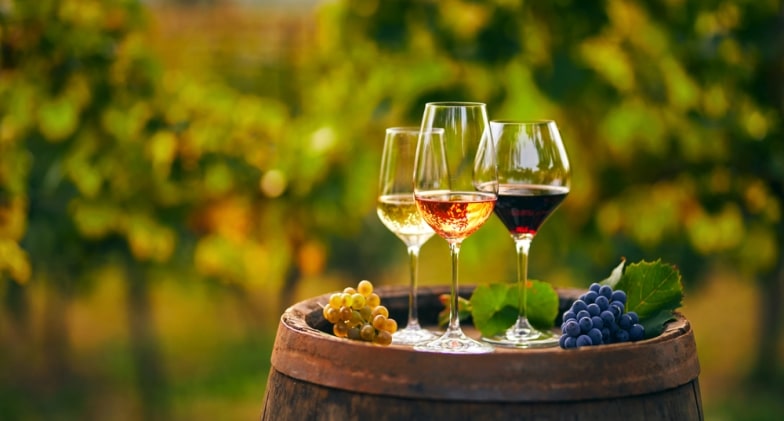 In between Yamanashi and Hokkaido sits Yamagata, which is a region of daily sunshine and high humidity. Similarly, between the months of August and October, a couple of typhoons will usually take place. As a result, the grapevines can encounter difficulty; however, they still flourish to make great tasting wines. The most popular brand, Takahata Winery, produces delectably sweet reds and whites.

It’s no wonder why Yamanashi is one of the top wine producing regions in Japan when it’s otherwise described as the Kingdom of Fruit. Generally speaking, the grapevines are deeply rooted, as a result of water running from neighbouring mountains.

There are upwards of 80 wineries in the region, making Yamanashi one of the most predominant wine producers in the whole of Japan. In fact, 40% of Japan’s wine production takes place in the region alone, which is perhaps down to the fact that the Japanese wine industry began in Katsunuma, a town in Yamanashi. Katsunuma  is situated within the city of Kōshū, and the grape variety that’s named after the city makes up 95% of plantings in Japan.

Koshu grapes have low sugar levels, a strong natural acidity, and thick skins that result in an especially delicate wine. Connoisseurs often describe the wine as a balance between Semillon and Pinot Grigio, due to the clean flavours combined with aromas of quince, white flower, peach, and citrus.

The most successful Koshu wine is made by Grace Winery, which boasts a combination of multifaceted aromas, including citrus with chalk, white flowers, and orange blossom.

Nagano has a subtropical humid climate with frosty winters, scorching summers, and the occasional typhoon. As a result, winemaking in the region can be quite a tricky feat, but this doesn’t stop exciting wines that a full of personality coming from the region. These wines dance across the palate, thanks to their light, intense, herbaceous, and fresh flavours that are smoothly drinkable.

The most famous winery in the region is Suntory Shiojiri Winery, which cultivates the best growing conditions that mirrors Nangano’s character.

Arguably, a most-talked-about compound recommended for bodybuilding is Rad 140. It has amazing benefits, but it is important to...
Automotive

Key To Become A Successful Interior Designer In 2022

The 5 Best Shower Standing Handles For Home To Buy

Gifts Card: The Preferred Mode of Gifting Loved Ones