Apple love spells are among the oldest in the history of mankind. It comes as no surprise, considering that Eve, the first woman, was tempted into disobeying God by the snake with an apple and then she tempted Adam with the same apple into disobeying God. Apples have multiple applications in magic. Green apples are used to make people lose interest in each other, rotten apples destroy friendship and love, and wormy apples can be used to make people sick or lose their mind. We aren’t going to use apples to do harm to anyone though. We’ll talk about white magic today, specifically about the apple love spell. To cast this spell, you need a red apple. The way you choose one will show if you’re meant to practice magic or not. To pick an apple, go to a farmer’s market or a grocery store, close your eyes, and try to sense the right apple for your ritual. Touch it and then touch some other apples, too. This apple should feel different from the others. Since it’s difficult to describe the sensations, just do it and see how it feels. When you know which apple to buy, buy it and bring it home.​ Expert guidance is crucial to get much happiness from a love marriage spell, and Spellcaster Maxim provides ample support https://spellshelp.com/Spellsbook/love_spells.php

Does the apple love spell work?

To begin with, let’s answer the following question: Does the apple love spell work? It does, provided the ritual is performed exactly as described in this article. Unfortunately, casting a love spell property without having at least some experience in spell-casting is as difficult as driving a car for the first time or making dinner for 12 persons for someone who’s never cooked before.

To practice magic successfully, one needs to be gifted. You’re either gifted or not. If you’re not, it’ll take you dozens of years to become a successful sorcerer or witch. Besides, there is no guarantee you’ll have any progress at all, even if you dedicate your whole life to magic. It’s not enough to just call yourself a magic practitioner. Before you cast a spell, make sure you have a gift for magic. To this end, take the below quick test and see how many yes-answers you have. Be honest and accurate. The more yes-answers you have, the better your chance of casting an apple spell successfully and getting what you want.

Have you replied “yes” to most of the questions? Then it’s time for you to find out how to cast the apple love spell.​ 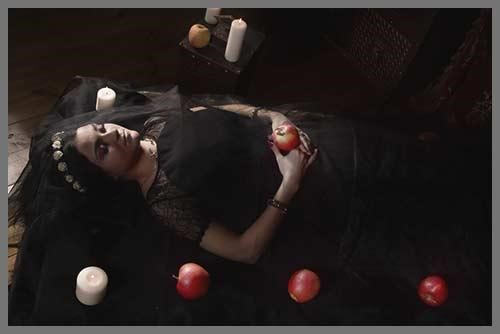 So, you’re confident you have some magic abilities and they’ve revealed themselves while you were choosing an apple to buy. Awesome! Now you can cast the spell. To perform the ritual, you need:

Spread the headscarf on the table. Put the pictures at the opposite sides of the table. The pictures should face each other so fold them a little so they don’t fall. Put the candle in the middle and light it. Put the apple between the pictures, take the knife in your hand, and keep saying the following mantra for 10 minutes, with your eyes on the candle:

Stick the knife into the top part of the apple seven times around the apple stem. Tie together two opposite corners of the headscarf and then tie the other two. The pictures and the apple should be inside the bundle. Wind the red thread around it 33 times. Light the end with the candle flame instead of tearing it off or cutting it off.​

Now run the tip of the knife around the bundle seven times. It’ll cut off the past – inability to find love, loneliness, previous relationships – enabling the future to begin – love, attachment, happiness.

Put the bundle in your secret hiding place. Put the knife in there as well. The knife will protect you from hexes, failures and magical side-effects. Put the candle out. In 24 hours (exactly in one day) light it again and repeat the same mantra for 10 minutes:

The spell will be activated when the apple dries out charging your ritual with its vital force. You’ll know the spell is working when your loved ones declares his (her) love for you. If he doesn’t, do what all people should do when their home-cast spells fail – contact a professional magiс practitioner.

Linking up with an experienced enchanter like Spellcaster Maxim https://spellshelp.com/ will surely lead to an outstanding love experience. Check more article

Effective Prevention of Rodents: How to Keep Mouse Poison Out of Your Crawl Space

How to Choose the Right Champagne For Any Occasion

The Investment Benefits of Solid Wood Furniture for Your Ottawa Home